After auditions in late November 2016, a first read-through followed by a two day workshop took place in December. Most cast members met for the first time and got to know each other in and out of character. Led by director Frances Byrd and Linnea George-Kupfer of BET (Bremen English Theatre), they started working on their roles in character-development exercises.

The rehearsal process itself started with the new year. Universität Bremen provided us with rehearsal space up to five times a week. Due to the diversity of our cast, scheduling was a hassle every month but Aenne’s dedication and persistence won every time.

Working on and with the script proved difficult at first, but soon the actors became familiar with the old language which MTT kept almost completely as Lyly wrote it. Just one particular character’s words were embellished with a couple of -isms of his modern counterpart and person of reference. They are marked in yellow in the following excerpt from the script. 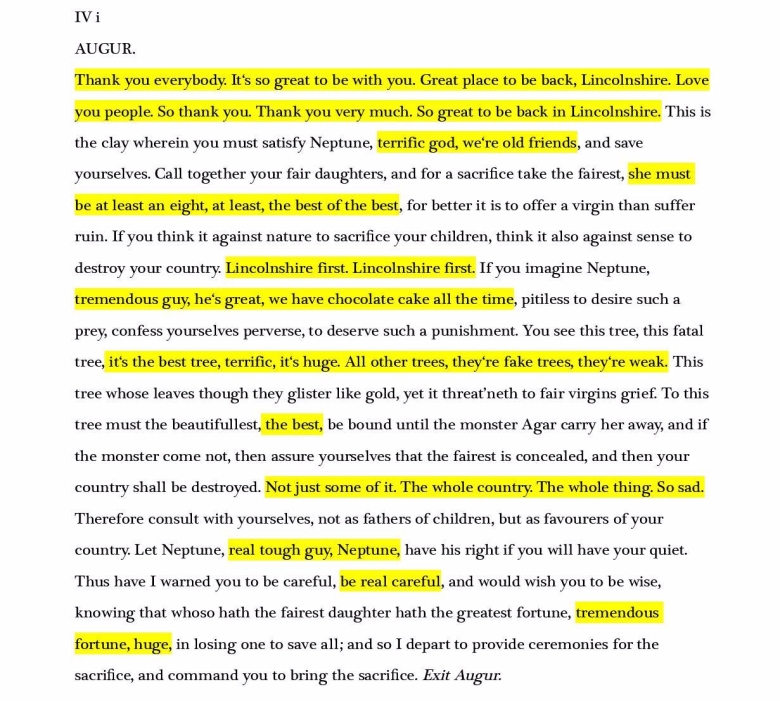 The first meetings with the respective plot lines consisted mainly of character discussion and the formation of plot archs.

While rehearsals were in full swing, so was the work on our three songs, with Frances Byrd writing melodies and chords and Tobias Turowski arranging the instruments and providing his raver knowledge for “Forest of Love”. Recordings took place both at university and in Neptune’s lair. The music is now available on https://maidenthought.bandcamp.com/releases

After several long weekend rehearsal days with record-breaking working hours especially for director Frances Byrd (her record being 9am-11pm nonstop), we only had one tech rehearsal day at Schnürschuh, before the curtain officially went up for our test audience of twelve exclusive guests. This dress rehearsal has been recorded and is currently being edited and cut. Stay alert for updates on a possible DVD release!